‘Was it Yesterday’ by Rebecca Pells

A few moths ago I attended the launch of a book written by the father of a friend.  First published in 1928/29, ‘Was it Yesterday?’ by A M Bown recounts his experiences in France during the First World War. For many years it remained out of print until his son and daughter, themselves now into their 80’s, realised that his story would be of interest to many others and so they set about the task of re-publishing.

‘When  he volunteered in 1914, A M Bown was a twenty year old scholar at Oxford (university) studying science.  He became an artillery subaltern and remained one throughout the First World War, being wounded twice and gaining the Military Cross for bravery.  This book, although fictionalised, grew out of his personal experiences and is a vivid and authentic account. 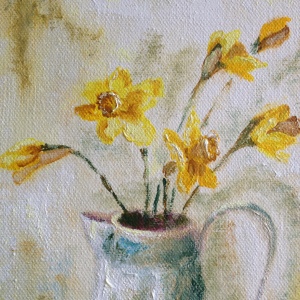 He tells of ordinary day-to-day incidents, some amusing, some frightening, and gives a sense of real lives – and real deaths.  He keeps throughout a respect for his fellow soldiers, saying:

“So this little team in khaki stood waiting for the starting gun . . . in the greatest game of all, and whatever share the fields of Eton (college) may have had in any winning of it, the same share must be credited to the back alleys and the cinder patches, the parks and the recreation grounds which had been the nurseries of most of those who stood together in that forward line, picked to play for England.” ‘

Inspired by Bown’s story and with his family’s permission, I painted  ‘Was it Yesterday?’  The opened book sits upon a table from around 1916.  Original wallpaper tinged with ‘forget-me-not’ blue symbolizes the fading of memories of a time long since gone but which also bears witness to the present – a jug of fresh spring daffodils and bright scarf cast aside in a hurried moment. So intense are the events of which the author writes, that they feel like they happened only yesterday.

‘Was it Yesterday?’ by A M Bown